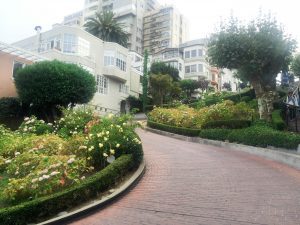 I had the pleasure of going to San Francisco, CA for work because our headquarters is based just outside of the city in Mill Valley. I didn’t have much time to really get to see the city because the trip was strictly for work, but I did make use of the time that I had after work and on lunch.This job was new at the time, so I was nervous to go with colleagues who I really didn’t know well and then meeting a bunch of people I had only talked to via video chat.

The first night I really wanted to go to Muir Woods, so Alyse and I one of my new colleagues ended up joining me which was so fun! I had been researching so much on how to get to Muir Woods from where we were staying and everything said to drive or take the shuttle and that you will have NO SERVICE so you can’t take a cab. Well at the time of the year we were there the shuttle wasn’t running and we didn’t have a car, so we chanced it with a cab. It was so easy getting up to the woods, but we had to literally sit in specific spots and not move to have service when we were done. Luckily we got a cab, I swear my Grandpa was looking over me because I was so nervous. What do you do if you get stuck at Muir Woods and you don’t show up to work the next day? haha. It was so worth it though! It was so peaceful being up there after a long day of traveling and the long week we knew was upon us. It was exactly what I needed and it was great bonding experience with one of my new co-workers! (Sorry these aren’t the clearest photos I only had my iPhone)

During our lunch break the next day we made the most out of the hour and headed to see the spectacular views of the Golden Gate Bridge  at Battery Spencer Park located in Marin County.Not only could we take in the beautiful north views of the bridge, but the bay, Angel Island and Alcatraz! The wind was whipping off the bay and it was so foggy ( which did not work in our favor for pictures), we were so cold! Alyse and I were not prepared in the clothes we were wearing, but come on we are used to the humidity in Chicago at that time of year.

On our last night I headed out to dinner and drinks with another one of my new coworkers. I dragged him to Lombard Street poor guy, there were so many tourists but I just am amazed by the Streets in San Fransisco. We walked around a bit and then made our way near the Fishermans Wharf area. While approaching this area we knew it was not somewhere we were really interested in seeing more of, so we headed to the Marina area and found some restaurants and shops on Chestnut street. We ended up eating and having drinks at The Tipsy Pig it was really good I would definitely recommended it if you are in the area! Continued our night walking around and popped into Reed and Greenough which is a local upscale lounge to end our night.

There were a few things I love about San Fransisco. Everyone at work was talking about going to Napa or Sonoma for the weekend because its so close, you can go surfing in the morning and head north to go skiing in the afternoon or head to the woods and go hiking. The geographical nature of San Fransisco you really can’t beat! The opportunity in the tech industry is incredible and it seems like the climate is pretty steady all year round!

I hope that I can go back for work and explore San Fransisco even more, but for the short time I had there I really enjoyed it! I traveled there with my family when I was in grade school, but as an adult you really appreciate a lot of the beauty that you didn’t when you were 10. Thanks San Fransisco, till next time!